You Are Here: Home → Testing roundup → Failure, Am I? 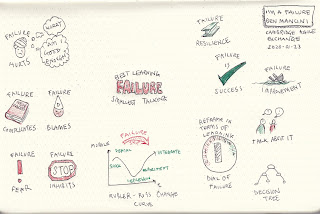 It's nothing personal I'm sure but at this week's Cambridge Agile Exchange Ben Mancini told me that I'm a failure. Ouch!

Failure, he says, is "the state or condition of not meeting a desirable or intended objective … may be viewed as the opposite of success" and his hypothesis is that failure provides more learning than success but that we talk more about success than failure.

In his talk, Ben showed examples of people who have succeeded despite repeated failure, talked about the negative effects of failure, ways to reframe perceived failure, and the benefits of pushing through failure's cloud to its silver lining. Along the way he shared some of his own failures and invited us to share personal faux pas with our neighbours in the audience then look for the learnings in them.

One of the reasons I attend meetups is to be provoked into thought so, in no particular order …

Ben's definition of failure comes from Wikipedia. At first flush it seems reasonable but read further down the Wikipedia page and you'll find nuance that again accords with my own instinct. As with so many things, failure is subject to the relative rule: failure is failure to somebody at some time. The same event might be viewed differently by different people or by an individual in the moment and then later.

It's easy to say "failure is a better teacher than success" but historically I've been sceptical about it, at least stated as baldly as that: is it really better every time, for any person, for all kinds of learning? I changed my position slightly after reading Matthew Syed's excellent book, Black Box Thinking. I think learning from an action — positive or negative — requires reflection about (for example) what was done, what happened, the relationship between the two, other things that were done contemporaneously and other things that might have happened.

A failure might provoke more of that kind of reflection, for sure. As Richard Cook writes in his paper How Complex Systems Fail:

… all practitioner actions are actually gambles, that is, acts that take place in the face of uncertain outcomes. The degree of uncertainty may change from moment to moment. That practitioner actions are gambles appears clear after accidents; in general, post hoc analysis regards these gambles as poor ones. But the converse: that successful outcomes are also the result of gambles; is not widely appreciated.

For me, the key here is post-hoc. The same kind of learning might be taken from positive events if we reviewed them. To reflect on Ben's hypothesis: do we really talk more about success than failure? Which we, measured how?

I find Cook compelling on sociotechnical modes of failure, see e.g. Everybody Flirts, Fail Over, and Read it and Weep, and his system-wide perspective prompts another interesting question: whose learning are we interested in? The individual or the system?

In the talk, James Dyson was used as an example of someone who had failed many times before succeeding. His quest to create a bagless vacuum cleaner is well-documented and for me is an example of one context in which I'm comfortable to say that failure (on some specific interpretation) is indisputably a learning experience.

Dyson created thousands of incrementally different prototypes, iterating his way to one that had all of the functionality that he needed. Was each attempt a failure? Or was each attempt a step towards his desired outcome, a quantum of success? Setting up actions as experiments means that getting a result at all is the goal. Generate-and-test is a legitimate strategy.

Related, which parent hasn't allowed an action to proceed, confident that it will not work, because a bruised knee or a burnt finger or a low mark in the test appears to be the way that the offspring wants to learn a particular lesson. Advice could have taught it, but a painful experience can help too. How should we view this kind of event? From the child's perspective, in the moment, it's a painful failure. From the parent's perspective, in the moment, it's vindication, success. Who is right? For how long?

Most parents would try to set up those kinds of outcomes in a safe way. Assuming that learning from failure does have high value, I wonder whether it is diminished by happening in a safe environment? Might the scale of learning increase with jeopardy? But some failure could be terminal: should we learn to walk the tightrope by crossing Niagara Falls?

As a manager I've used the safe space tactic although I try to be open and explicit about it. Perhaps I'll set it up as "I would be delighted if you showed me I was wrong" or "If this works for you, then I'll have learned something too." I think of this as a way of making the effort into an experiment.

Some jobs are apparently set up for failure: a salesperson might expect to sell once in 100 opportunities. Is that 99 failures per success? I've heard it cast in this way: each rejection means one less before the sale. There is no fear of failure with this philosophy and, while those of us who cringe at the idea of working in sales might find it hard to believe, that kind of approach can be learned.

I wonder how to control the learning that comes from failure. It's well-known that machine learning approaches which rely on being "taught" by trying, failing, and being corrected  can pick up on unexpected aspects of their training material. Is there an analogue for human learning? Ben listed a bunch of authors in his talk, people who'd tried, tried, and tried again to be published despite numerous rejections. What was their learning? To be resilient? To sell themselves well? To find their tribe? To get better at writing?

Could it be that some of those people learned nothing through failure to convince an editor that they had a story worth telling? Could they, for example, simply be already resilient folk with large egos that needed satisfying? What about survivorship bias? Where are all the people who failed as many times but didn't ultimately get published? What was their learning? Was it greater than those who were published? How is that even measured?

My goal in this post was to spend a limited time to work through the right-now thoughts that were spurred by Ben's talk. I think I achieved that. Having seen them, you might decide that all I have is shallow, half-cooked, or just plain nonsense. If so, have I failed? If you liked the notes, have I succeeded? Could either outcome make me a success or a failure? To who? On what basis?

Source: ministry of testing
Failure, Am I?