This is the story of Mr. Zahn about the year he spent in Vietnam war flying the Cobra attack helicopter. As he was deployed he wrote letters and recorded audio tapes and sent them home, and years after he managed to put all this log together and write a interesting story about his experience. 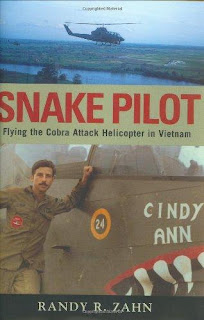 In his unit, they were three type of teams.
Team Red flying a OH-6 Loach, a small, light and fast helicopter.
Team White flying the AH-1 Cobra, a attack helicopter.
Team Blue would fly the UH-1 Huey, the transport helicopter carrying a platoon of soldiers.

Early in the morning, they would get a mission, some area to recon, something to look after, and they would take off.
Once they got to the area of operations, the Loach would descend to tree-top level, and start doing clockwise turns, getting slower and lower as the pilot would spot anything interesting, anything related to enemy activity such as tire marks, water puddles, wood fires… or direct fire!. The crew of the Loach had a short range radio, no maps, no navigation instruments, a rifle and a machine gun, but the deadliest thing they could throw away was a smoke grenade.

In the meantime, the Cobra would be orbiting hight around the Loach, making wide anti-clockwise turns in order to keep in sight the Loach while staying away for small arms fire, and if the Loach got into trouble, the Cobra would turn in, build speed out of altitude and engage with everything they could fire to the spot marked by the smoke signal. 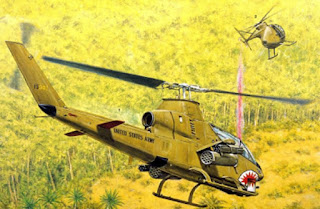 The pilot of the Loach was responsible of exploring and finding information, the pilot of the Cobra was there to protect the Loach, to navigate from the base to the operations area and back, to use the long range radio and ask for artillery support, call for a airstrike, coordinate with gound troops and any other airborne unit.

At some point they would need somebody down in the ground, to investigate something, talk to people, evacuate a downed crew, support friendly troops operating in the area… then they would call the blues. The Blues were airborne infantry specialized on the job of getting on and off from the helicopter as fast as possible. 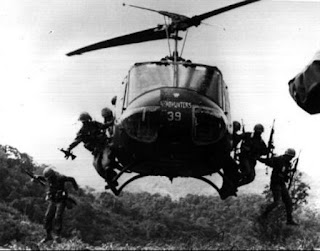 Trying to get an analogy with software testing is a bit difficult. After all, when I am testing issues, nobody wants to kill me with a AK-47, my chopper won’t fall apart because of bad maintenance, I won’t fly into any area where artillery is about to hit, and I don’t want to kill nobody either, so it doesn’t matter how stressful it might get, there is no way to compare with that.

But we do share the technique. When we do pair testing, one tester is carefully using the software under test, doing wide circles first learning about the features, and stopping when he finds something unexpected and reporting it. The other tester is navigating, helping the first to not get lost, adding information when required and calling for help if the situation goes wrong.

We do like to have a target, to know what we are looking after, instead of doing a “just test everything” kind of mission, also we do get proud of the work we do.

We don’t wear a Calvary hat, but Ministry of Testing stickers on our laptops, so when we meet unknown people at the lounge of an airport, checking his laptop with the sticker, we know how to salute and engage a conversation, we have something in common.

The book also has some interesting stories relating to stressful situations, war stories and leadership management, so if you got reading this far, and think you would like to know more, go and but Mr Zahn a beer and ask him to tell a story.

If you are not living in Alaska, where I think he lives now, you can always buy his book, that would also make it.

The pictures come from this blog.